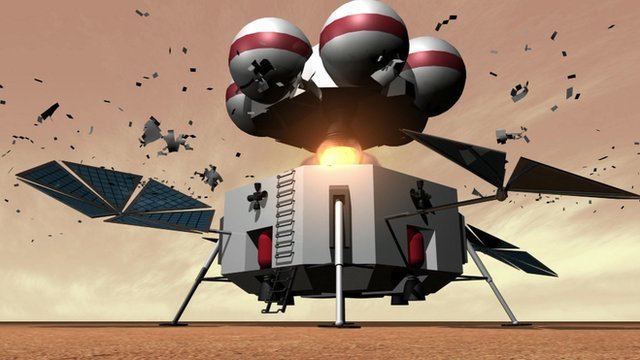 Scientists at Imperial College London have designed a concept mission to land astronauts on Mars.

The plan envisages a three-person crew journeying to Mars aboard a small two-part craft.

The craft would rotate to generate artificial gravity and use a heat shield to protect itself against solar flares.

The crew would then return to Martian orbit in a pre-sent craft fuelled using ice from beneath the planet's surface.

The concept, developed in conjunction with the BBC, is intended to spark further debate about the technical obstacles and risks that would have to be overcome in order to put humans on Mars.

"Every part of this mission scenario has been demonstrated one way or the other, including the in situ propellant production on the surface of Mars," said Prof Tom Pike, who led the Imperial design team.

"There are big, big jumps between a demonstration at one level and putting together the engineering systems for a mission, but they are engineering challenges. They are not fundamentally about making new discoveries."

The new Imperial concept comes amid renewed interest in the Red Planet with two private groups having proposed missions in recent months.

The Imperial team have designed a two-part craft, consisting of a Martian lander with a heat shield, inside which the crew would also ascend into Earth orbit.

Directly beneath the lander on the launch pad would be a "cruise habitat vehicle", a cylindrical craft split into three floors and measuring some 10m (30ft) in height and 4m in diameter.

Once in Earth orbit, the astronauts would move from the lander into the larger habitat vehicle before a rocket burst would propel the conjoined craft on a trajectory to Mars. The quickest journey time would be nine months when Earth and Mars are in optimum alignment.

Shortly into the journey, the lander and cruise vehicle would unwind from each other on a steel cable tether to a distance of some 60m. Short thruster bursts from both vehicles would then set them spinning around a centre of gravity.

This would create artificial gravity within the habitat vehicle similar to Earth's gravity, which the scientists believe would prevent the type of muscle and bone wastage that weightlessness would cause, which would render the astronauts unable to walk on Mars once they arrived.

Later in the mission, the spin rate could be reduced to better emulate Martian conditions, where gravity is 40% that on Earth.

"We've obviously got some real issues with a long-term mission in terms of the de-conditioning which goes on in the space environment," Ryan Robinson, the Imperial team's physiologist, told BBC News.

"Bones loss [in a weightless environment] is about 1-2% a month and if they're landing they'll be susceptible to fractures if they've got to be exerting themselves."

During the journey, the crew's health would be monitored closely with wireless sensors - but they would rely entirely on medication aboard the craft and the skills of their fellow crew members should they fall sick.

The long journey and confined quarters could also affect their mental health, and conflicts between the crew could arise. 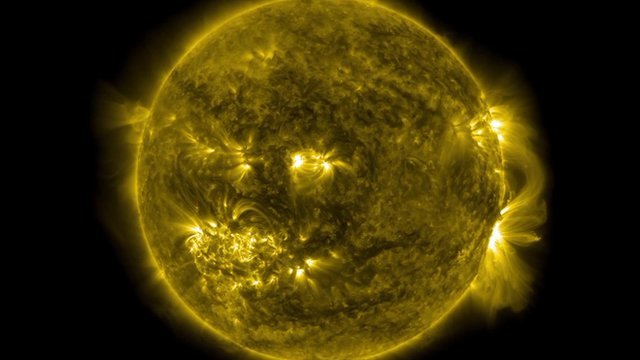 During the journey, the craft could deploy a number of measures to try to reduce the threat to the astronauts from solar and cosmic radiation, the former from the Sun, the later emanating from beyond our solar system.

Water could run within the shell of the cruise craft to absorb radiation, while the Imperial team also examined the idea of fitting superconducting magnets to the craft, which would generate a magnetosphere to deflect solar and cosmic radiation in the way the Earth's natural magnetosphere does.

This would involve winding in the tether and re-directing the lander's heat shield towards the Sun to protect the astronauts in the cruise craft.

The crew would also put whatever they could find between them and the front of the vehicle to absorb the solar burst. 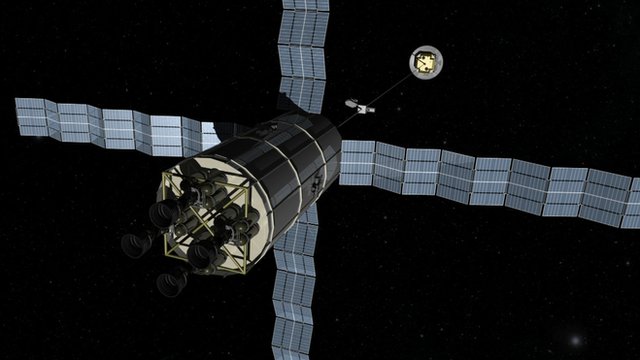 Even with such measures, a solar flare could still kill, or result in cancers. Cosmic radiation could also take its toll.

"We've got some great results from the Mars curiosity rover," said Imperial's Martin Archer, who specialises in solar and cosmic radiation.

"On its trip to Mars, it measured the radiation from these galactic cosmic rays and it was exposed to quite a lot - about two-thirds of the level that Nasa is prepared to risk over the whole of an astronaut's life, just on the way there and back again."

Once the craft reaches Martian orbit, it would contract together and the astronauts would pass into the lander ready for detachment and descent.

Its shield would absorb the heat of entry before being jettisoned and then multiple parachutes would deploy to slow the craft, with thrusters used to further slow and guide it through the final metres to the landing site.

The Imperial team propose a landing site near the equator, where milder conditions exist.

They would hope to land near a pre-sent Martian habitat module and rover, although the rover could be robotically controlled to travel from the habitat to the landing site if the distance was too great for a crossing on foot.

Then the Martian visit would begin - a first human landing on another planet.

The time spent on the Martian surface would be dictated by the next time Earth and Mars aligned for a speedy return home. It could be two months, or we might choose to spend more than two years on Mars, says the Imperial team.

It is during this time that the human crew could try to demonstrate why humans could still outperform robots in analysing and understanding the Martian environment.

"Some people think that the use of humans is just something that is popular and attractive from an adventure and inspirational point of view, but there are also real scientific benefits for sending humans," said Prof Mark Sephton, the team's geologist.

Radiation would remain a danger during the stay, with Mars possessing no magnetosphere to shield the surface from cosmic and solar rays. Shovelling up soil from the surface during the mission and part-burying the habitat module could help, as could staying inside during a solar burst.

Then comes the return home, which would be far from simple.

The approach taken by the Imperial scientists would be to pre-send both the habitat module, rover and a return vehicle before any human launch.

The return vehicle would land at a latitude where water ice would be found in large amounts just a few centimetres beneath the surface. Robotic devices would mine the ice, which would then be split into hydrogen and oxygen using electrolysis.

These gases could be used as fuels on their own, or the hydrogen could be combined with carbon dioxide from the Martian atmosphere using a catalyst to produce methane, which is a more stable and energy-dense fuel than hydrogen.

As the Imperial team propose landing near the equator, a crew would have to travel by rover to a cooler latitude where the return vehicle and ice-mining devices would be waiting. Several hundreds of kilometres may have to be crossed, posing both risks and opportunities to further explore the Martian landscape. 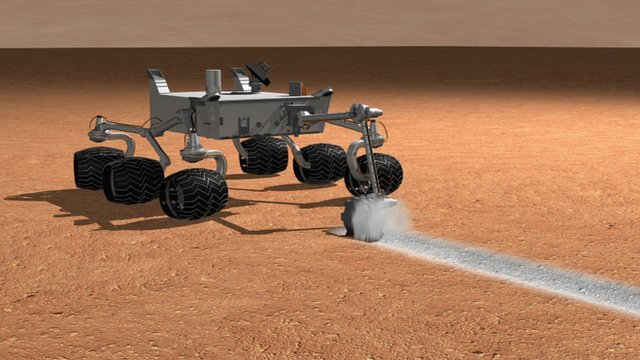 After at least nine months, the craft would reach Earth orbit and dock with the International Space Station before the astronauts could take a Soyuz capsule home, the team envisages.

The new Imperial concept comes amid renewed interest in the Red Planet, with two private groups having proposed missions.

Businessman and former space tourist Dennis Tito wants to send an American couple on a mission beginning in 2018 that would pass within 100 miles (160km) of Mars before using the planet's gravity to "slingshot" the craft back to Earth.

The Dutch project Mars One proposes putting a human colony on the planet beginning in 2023, while SpaceX chief executive Elon Musk has spoken of sending a private human mission to Mars within 12-15 years.

The US, Russian, European and Chinese space agencies maintain long-term plans to put humans on Mars.